Bread is a staple food prepared from a dough of flour and water, usually by baking. It has been popular around the world and is one of the oldest artificial foods, having been of importance since the dawn of agriculture. Although no one really knows when the first loaf was baked, bread has been around for thousands of years. The presence of stone utensils and ovens dating back to the Neolithic seems to be witness to this. Bread was initially unleavened, as the first yeast was introduced by the Egyptians around 4000 years ago. In ancient Rome bakers were considered important members of society, as bread had an essential role, both for nutrition and religion: it was usual to bake and offer ritual loaves of bread during festivals to the gods. This was actually so common that, often, ovens were even built in temples. Romans were also the first to produce the type of flour needed to bake what is known today as "white bread", and they improved wheat's milling techniques. It is pretty clear that the roots of bread making in Italy go far back in time.

Focaccia is a flat oven-baked Italian bread similar in style and texture to pizza dough. It may be topped with herbs or other ingredients. Focaccia is popular in Italy and is usually seasoned with olive oil, salt, sometimes herbs, and may at times be topped with onion, cheese and any other toppings. It might also be flavored with a number of vegetables. Focaccia can be used as a side to many meals, as a base for pizza, or as sandwich bread. Focaccia al rosmarino (focaccia with rosemary) is a common focaccia style in Italian cuisine that may be served as an antipasto, appetizer, table bread, or snack. Focaccia al rosmarino is a popular style of flatbread in Italian cuisine prepared using focaccia dough, rosemary, olive oil and salt, sea salt or kosher salt. Whole or sliced fresh rosemary leaves may be used, as can dried rosemary. Rosemary is among the most common herbs used to flavor Focaccia bread. Additional ingredients such as garlic, or basil may be used. Here I am topping my Focaccia with bell peppers and Dried Rosemary and some black pepper. The aroma of this Bread is just awesome because of Rosemary. I was so happy that my bread came so perfectly baked and we enjoyed it in our dinner by making some Focaccia sandwich with cream cheese and veggies. That was damn delicious. This was my first attempt for making Focaccia. First I was thinking to make typical normal Focaccia which contain Basil leaves and Rosemary topping. But Couldn't make it to go and buy Basil leaves so dropped the idea and thought to make it with colorful Bell peppers. I enjoyed baking this Lovely Bread. Today It was a baking day for me. I baked three back to back recipes. In the morning I baked Focaccia, Then baked Dinner Rolls, Then As it is a Fathers day today, So Prisha wants to give her paa a surprise, She told me to make a cake. ;) There are many Bananas At home, So baked Banana and coffee flavor Cake. A simple one, small one and just topped it with some sliced almonds and coffee. It was wonderful. Himanshu came back home, as Prisha was waiting for him eagerly. She can't keep that surprise in her, Hahahha my lil princess :) And she hugged him told him Happy Father's Day papa, We made a cake for you...Hahahah....And he was like.....Reallyyy???? Looking at me so surprisingly :) And I nodded with a smile ;) In her School, Her School staff sent one T-shirt to every Super Dad with the Palm print of their kid. Prisha too made it and got it back to the home. Himanshu wore it and got emotional, which he never ever been. Well, He enjoyed the moment and I felt so so good by watching this beautiful bond of father and daughter. As its a pretty  beautiful that every daughter is a princess of her father, As me too ;) Love you Paa :) Happy Father's Day to you too :) This is the T-shirt :) As This Post is for our 45th Foodiemonday Bloghop...Woooow!!!! This time we all foodies are coming with different Breads.....The Theme is #Breads....Sounds Cool Right ? ;) You all gonna enjoy varieties of Bread from our Foodiemonday team. and It was an amazing experience when I was Baking it :) So you guys check out the step by step recipe below :) Happy Baking :) 1. Heat the milk and turn off the flame. Stir in the sugar into the hot milk. When the milk is lukewarm sprinkle the yeast and allow to rest for ten minutes. 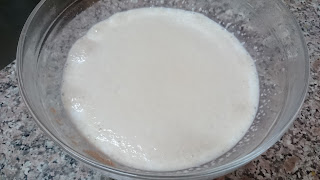 2. Take a bowl and add flour and salt and mix well. Stir in the oil and yeast mixture. Mix it with your hands that dough comes together. Then knead the dough for four to five minutes. Now use the base of your palms to knead into a smooth pliable dough on a work surface or a clean kitchen platform. 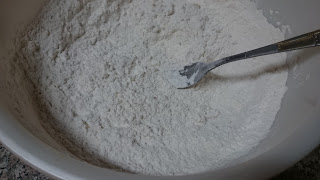 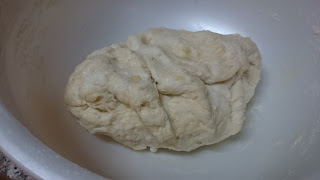 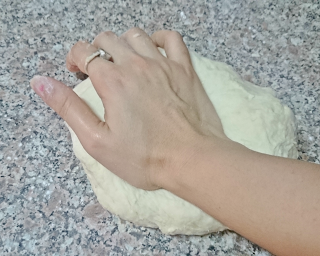 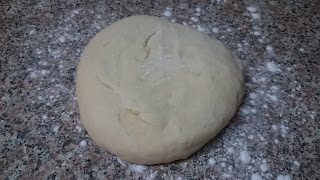 3. Roll the dough into a rough rectangle using a little corn flour, Carefully transfer the rolled dough into a greased 9” by 12” baking  tray. Spread and shape the dough to fit into the tin. 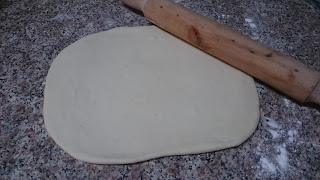 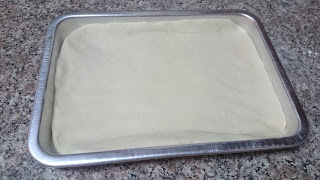 5. After the dough is raised and doubled in size, make equally spaced indentations with your thumb or forefinger. Apply lots of Olive Oil on the top of the bread, Place the sliced bell peppers and Sprinkle the Dried Rosemary and some black pepper on it. Again sprinkle some Olive Oil on the topping. 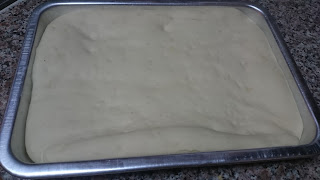 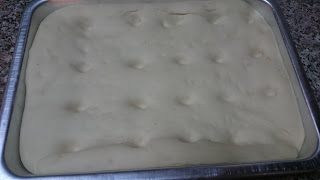 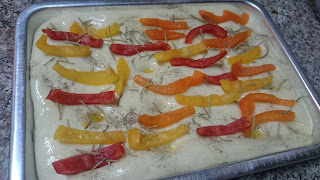