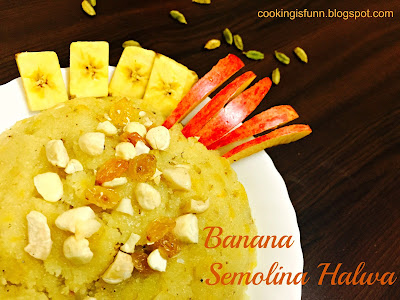 Presenting our 5th #foodiemonday #bloghop theme, which is "Indian Halwa"... and I am presening my favorite and super yummy Sooji ka Halwa...But this halwa I am preparing with Banana....Trust me this taste will take you to the heaven...I love love it....At my place, If you organising "Satyanarayan Bhagwan Ki Pooja" You will definitely and for sure get this Halwa as a Prashad....Whoever in my colony or society having this pooja I will go there for sure to get this Prashad...The Prashad will be full of Dryfruits and Fruits over this Halwa...And ohhhhhhh I can really feel that halwa in my mouth...Mmmmmmm  yummmmmmmmyyyy!!!! When you add Cardamom in this Halwa, The room, Your kitchen will be full of sweet and nice aroma....!! I like this aroma a lot. 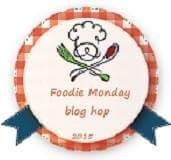 Flour-based:
This type of halwa is slightly gelatinous and made from grain flour, typically semolina. The primary ingredients are clarified butter, flour, and sugar.

Nut-butter-based:
This type of halwa is crumbly and usually made from Tahini (sesame paste) or other nut butters, such as sunflower seed butter. The primary ingredients are nut butter and sugar. Halwa may also be based on various other ingredients, including sunflower seeds, nut varieties, beans, lentils, and vegetables such as carrots, pumpkins, yams and squashes.

Halwa can be kept at room temperature with little risk of spoilage. However, during hot summer months, it is better kept refrigerated, as it can turn runny after several days. 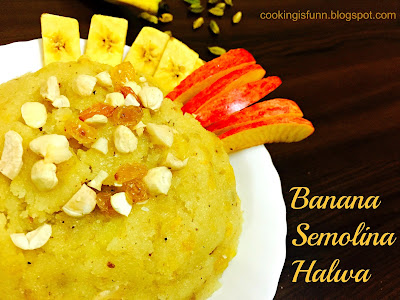 This Sooji halwa is produced and served in India, Afghanistan, Nepal, Bangladesh, Pakistan,and surrounding countries. It is usually made with wheat semolina, sugar or honey, and butter or vegetable oil. Raisins, dates, other dried fruits, or nuts such as almonds or walnuts, are often added to semolina halwa. The halwa is very sweet, with a gelatinous texture similar to polenta; the added butter gives it a rich mouth feel. The standard proportions of semolina halwa are one part fat (a vegetable oil or butter), two parts semolina, two parts sweetening agent (e.g. sugar or honey) and four parts water. The semolina is sautéed in the fat while a syrup is being made of the sweetener and water. Then the two are mixed carefully while hot, and any extra ingredients are added. At this point, the halwa is off-white to light beige, and rather soft. Depending on recipe and taste, it can be cooked a bit further, which makes it darker and firmer, or left to settle as is.

In India, halwa is prepared in different forms. The recipes use flour, melted butter or ghee, sugar and optionally goondh. It comes in various colors like orange, brown, green and cream with a translucent appearance studded with raisins, cashew nuts, pistachios, almonds, etc. Technically the term halwa is used in native recipes throughout India, and though semolina halwa is considered to be essentially a "Northern" confection, it is also quite popular in South India.

1. In a deep, heavy based sauce pan, melt the ghee add the mashed or pieced Banana and cook for a while, Add Sooji and stir fry over medium/low heat, depending on how often you stir it. 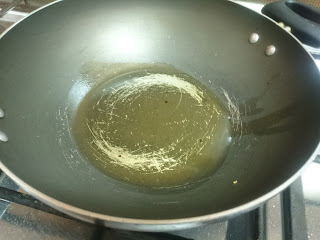 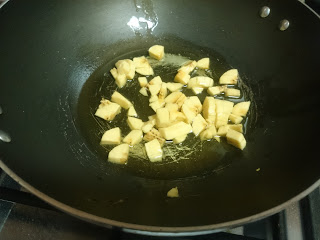 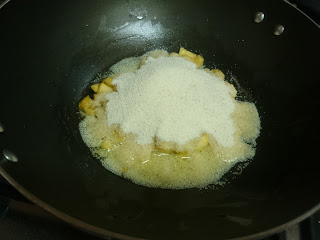 2. Cook the Sooji until it turned brown. Add milk into the Sooji mixture a lot of steam is created, which burns your hand. 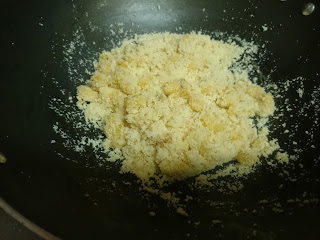 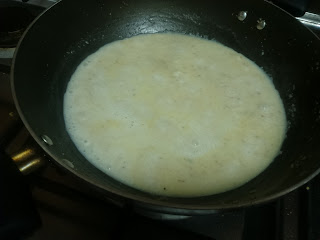 3. When the Sooji is a light brown and gets a glossy look and does not stick together much (which means it is fried enough) and bring to a boil, then simmer till the liquid is absorbed add the Banana Essence, sugar and the cardamom and dryfruits, At this stage you can stir off and on, not continuous. 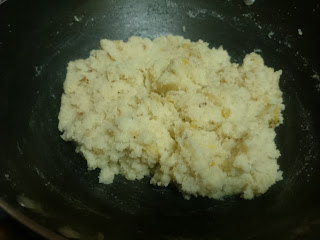 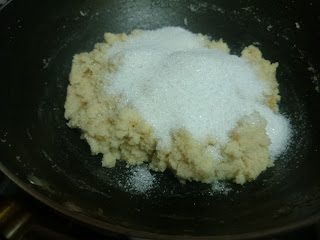 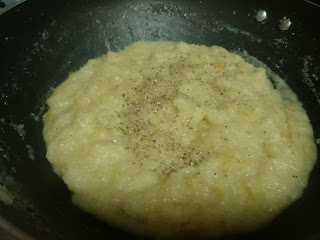 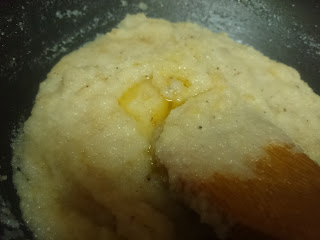 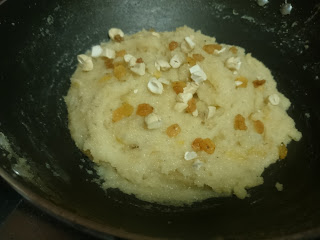 Serve hot, Garnish with the Dryfruits and Fruits. 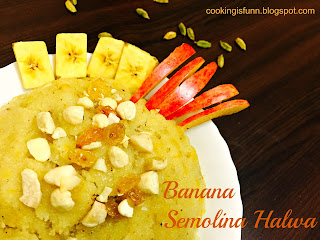